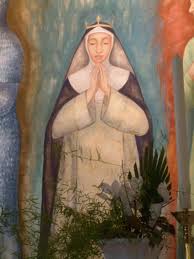 Margaret of Hungary, princess, Dominican nun, saint. Her story is unique: King Bela IV of Hungary and his wife promised to dedicate their unborn child to God if He would spare their country from the invading barbarian tribes. So at the age of 3, Margaret was given to the Dominican nuns of Vesprem. A few years after this, Margaret confirmed her parents' decision of her own free will. Several suitors sought her hand in marriage, but Margaret always refused, saying she had promised fidelity to her Lord Jesus Christ. No one in the monastery excelled her in humility and charity. She was obedient to the Holy Spirit in all things, and had an ardent love for the Eucharist. She died at the age of 28. Margaret is the patroness of peace between nations, an appropriate saint to invoke during these days of strife and conflict and war in our world! And yes, St. Elizabeth of Hungary was her cousin!
Another view of St. Margaret: 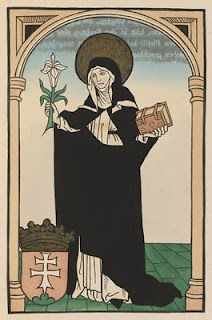