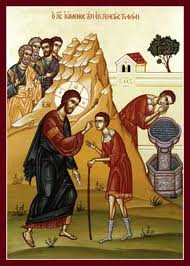 In St. John's account the blind man does not know who Jesus is until the end of the story. Jesus asks him: "Do you believe in the Son of Man?" He answered and said, "Who is he, sir, that I may believe in him?" Jesus said to him, "You have seen him, and the one speaking with you is he." He said, "I do believe, Lord," and he worshiped him.
Since the man was born blind it was unheard of that such a man could see again. So, we do not hear him begging for a cure. Yet, Jesus stopped, "spat on the ground, made clay with the saliva and smeared the clay on the blind man's eyes, saying to him, 'Go, wash in the Pool of Siloam'." He went, washed and came back able to see. By this time Jesus and his disciples had left. So although he could see now, he did not see Jesus. He only knew him by name, that he was a good man who did the impossible: cure a man born blind. To this fact he gives witness to his neighbors, his parents and to the Pharisees that this man was good: "A sinner could not have opened the eyes of a man born blind," he said to them. In the end he was criticized, and expelled from the synagogue.
When Jesus heard that this man had been thrown out of the synagogue, he sought and found him. At last the man could see Jesus! Jesus said, "I came into this world for judgment so that those who do not see might see, and those who do see might become blind."
Jesus desires all people to see him and to believe that he is the Son of Man. Some choose to remain spiritually blind although they can see; others choose to see, although, through no fault of their own, they are blind spiritually or physically. Jesus heals those who want his healing.
This story comes midway through Lent to give us hope and direction: hope in the great mercy of God that He will pour out on us as we reach Holy Week and Easter, and direction to know how to follow Him more closely. God's mercy is without end. It reaches to the depths of our being and enables us to see our "blind spots" and ask for God's healing.
We grow in our knowledge of Him as we allow ourselves to enter into a closer relationship with Jesus, the Son of God and Son of Man. Like the beggar, then, we too can worship Him as Lord and thank Him for his great mercy to us.