Translation of Our Holy Father Dominic 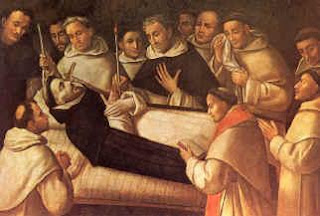 St. Dominic died on August 6, 1221. For some reason (his successor as Master of the Order of Preachers, Blessed Jordan of Saxony, refers gently to the "brothers whose simplicity outweighed their prudence") he was simply buried in the church of St. Nicholas of the Vineyards in Bologna, Italy and more or less forgotten by the brethren, who were apparently too busy carrying on Dominic's work to think of Dominic himself! Some, as Blessed Jordan points out, disagreed with this policy, but they "offered no opposition because they were fainthearted." It doesn't speak well for the first followers of St. Dominic! Finally, twelve years after Dominic's death, Pope Gregory IX encouraged the brethren to move his body to a more suitable tomb. The brethren had misgivings about this, fearing that Dominic's body--which "had lain in a mean tomb exposed to the elements"--would be found decomposed. However, their fears were foolish. When the tomb was opened "a wonderful odor poured out from the opening and its fragrance caused astonishment among those present. Everyone shed tears and feelings of joy, of fear and of hope rose in all hearts." The body was taken to its new  tomb (or "translated", hence the name of today's memorial). Blessed Jordan writes, "This marvelous aroma, which the holy body breathed forth, was evidence to everyone how much the saint had truly been the aroma of Christ." This day, May 24, 1233, was the beginning of the canonization process of Dominic and it was completed on July 3, 1234, when he officially became St. Dominic. Since 1267 St. Dominic's remains have resided in this tomb in Bologna: 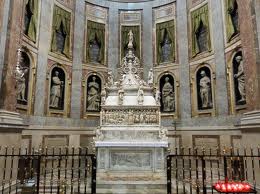