Most of us think of Franciscan saints, like St. Anthony of Padua (San Antonio) when we think of Texas--after all, the Franciscans were a big part of Texas history. But lest we forget--the battle which concluded the war for independence that Texas fought with Mexico took place near the river named San Jacinto--and that is Spanish for Saint Hyacinth, or Jacek, as he is known in his native Poland. A Dominican saint!

St. Hyacinth brought the Dominican Order to Poland and eastern Europe in the 13th century. One day when the Tartars were attacking, he removed the Blessed Sacrament from the church to prevent it from being desecrated. As he was doing this, he heard the statue of the Blessed Virgin Mary speak to him, asking Hyacinth to take her along, as well. Although the statue was very heavy, Hyacinth was able to carry both the statue and the monstrance to safety, which is why he is usually portrayed holding these two items.
It's possible that this river near where the battle of San Jacinto was fought--and which gives the battle its name--was discovered on or around St. Hyacinth's feast day, August 17--this is how some places in Texas got their names (think of the city of Corpus Christi). Anyway, the battle of San Jacinto (fought on April 21, 1836) was of enormous importance not only to the state of Texas but to all of what we now call the United States. As the inscription on the San Jacinto Monument reads:
"Measured by its results, San Jacinto was one of the decisive battles of the world. The freedom of Texas from Mexico won here led to annexation and to the Mexican War, resulting in the acquisition by the United States of the States of Texas, New Mexico, Arizona, Nevada, California, Utah, and parts of Colorado, Wyoming, Kansas and Oklahoma. Almost one-third of the present area of the American nation, nearly a million square miles of territory, changed sovereignty." 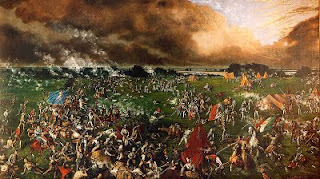 The Battle of San Jacinto
Check out our post on Texas history from a Catholic point of view here.