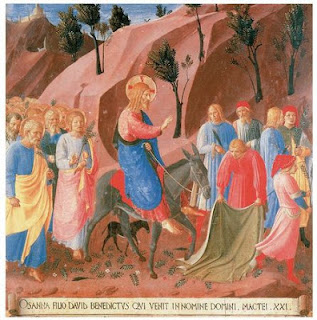 "Most of Christ's earthly life was hidden. He was hidden in his mother's womb, he was hidden in Egypt and in Nazareth. During his public life he was hidden often, when he fled into a mountain to pray...Today he is hidden in the Blessed Sacrament, in Heaven, and in his Mystical Body on earth. But in his passion he was exposed, made public property to the whole of mankind....All his secrets were out. Every detail of his Passion revealed something more of his character as man--not only his heroism and his majesty but his human necessities, and the human limitations which he deliberately adopted as part of his plan of love in order to be able to indwell us as we are, with our limitations...He was not only simulating our humanness outwardly but feeling as we feel; not only feeling his own grief, fear, compassion, need of sympathy, and so on, as man, but ours; not only knowing every nerve and fiber of his own love for us, but that of each one of us for one another."
--Caryll Houselander, The Way of the Cross

See our meditation on Palm Sunday from 2011 here.