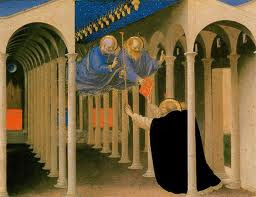 St. Dominic was not one to speak much about his inner spiritual life, but there is possible evidence that on a few rare occasions he confided some experiences to a companion. One such event was the vision of Saints Peter and Paul, which probably occurred in 1217 while St. Dominic was in Rome. The chronicler tells us that while Dominic was at prayer, he saw Peter and Paul coming toward him. Peter gave him a staff and Paul handed him a book, and they said, "Go and preach, for God has chosen you for this ministry." The vision continues with a scene of Dominic's sons, the friars preachers, "scattered throughout the world, going off two by two to preach to the people the word of God." According to the historian M.-H. Vicaire, OP, Peter and Paul are symbols of the Roman Church. Peter's staff is the official sign of God's messenger, while the book Paul gives Dominic represents doctrine. In this vision, Dominic received his inspiration: first, "to make his order coextensive with the world", receiving his message directly from Rome; second, to separate preaching from defense of the faith, and finally, that his brothers might be allowed to preach in every diocese in the world. (cf. Vicaire p. 230) Dominic may not have had an imaginative vision as portrayed above, but something certainly happened with God's grace, and inspired him as he founded  the Dominican Order. May Saints Peter and Paul continue to inspire us today as we strive to preach the word of God to all peoples!