Solemnity of the Immaculate Conception 2012 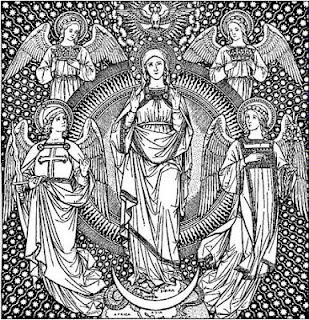 The Immaculate Conception of the Virgin Mary is a powerful example of God's largess--a magnificent gift to Mary and through her to all humanity, indeed all creation. With a certain measure of risk, God created the first man and woman with free will and they abused that gift by choosing to disobey God's commands regarding life in the Garden of Eden. When, in the fullness of time, God was ready to begin His new creation, He chose another sinless pair, Christ His Son and Mary of Nazareth. A familiar hymn, which we sing frequently at the Liturgy of the Hours, summarizes this story so well:

When, in His own image
God created man,
He included freedom
In creation's plan...
God to man entrusted
Life as gift and aim.
Sin became our prison,
Turning hope to shame...
Then in time, our make
Chose to intervene...
So that man's devotion
Newly might begin.


The Immaculate Conception is God's first intervention in his plan for his new creation. He once entrusted humanity's future to a "frail humble maiden", creating her sinless at her conception so that in complete freedom, she would be able to choose to obey God's will and so offer to her brothers and sisters in all generations the incalculable gift not only of true freedom, but also of everlasting salvation through the Son she accepted to bear when at the Annunciation she said YES to God rather than Adam and Eve's NO.

We turn to Mary then, as the perfect model of faithfulness to God and ask her: O Mary, conceived without sin, pray for us who have recourse to you.