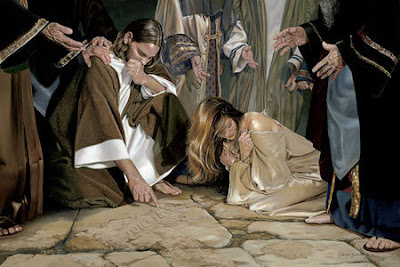 In today's Gospel, some people bring an adulterous woman to Jesus and ask him to pass judgment on her. Jesus' response is a multilayered revelation of just who Jesus is.

Little do the women's accusers realize that when Jesus says to them, "Let the one without sin be the first to cast a stone at her," that he is indeed the only one among them who meets that qualification. But rather than take advantage of this prerogative, Jesus challenges them to reconsider their accusation against her and they, one by one, decide to let it go. Just as in civil law, when a victim refuses to press charges against an adversary and so allows them to go free now Jesus uses the silence of the woman's accusers to allow their charges to be dropped. If they do not accuse her, then neither does Jesus. What does this say to us about the times we have held on to supposed or even real wrongs with the mentality that "they" were wrong and deserve to be punished? If we insist on their punishment, very likely they--and we--will feel its weight, but if we forgive, then they--and we--are set free, so that even Jesus is in a sense bound by our decision.

But there is more to this scene: Jesus is indeed the "one who is without sin" but he is also the one whom "God made to be sin", so in another way he is one of those who cannot cast the first stone. He has so identified himself with his brothers and sisters that he accepts the limitations of our sinful condition to such an extent that, as the Letter to the Hebrew says: "He is not ashamed to call them brothers" (Heb 2:11). Those people who presented the sinful woman for judgment slipped away in shame when their own sinfulness was exposed, refusing to be identified as her brothers. Jesus, on the other hand, was not ashamed to remain there with her--the sinner and he who was made sin! Who is there that we are ashamed to call our brother or sister?

As John said, Jesus had come unto his own--to sinful human beings, and many of them received him not. They even tried to stone him too! (John 8:59)