Queenship of the Blessed Virgin Mary 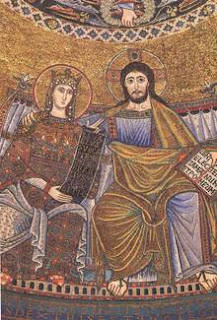 Today we celebrate the Queenship of the Blessed Virgin Mary. The title "Queen" is given to her for at least two reasons: first, she is the mother of our King, Jesus Christ, and second, she is Queen by virtue of the dignity given to her by her Son. This memorial was celebrated for many years "unofficially" and was given official recognition in 1954 by Pope Pius XII. It ties in beautifully with the solemnity last week, when we celebrated Mary's Assumption into Heaven, body and soul. Having been assumed into Heaven, she is crowned Queen. This is recalled in the fifth glorious mystery of the Rosary. Mary is Queen of everything, in a sense: in the Litany of Loreto, she is extolled as "Queen of angels, Queen of patriarchs...Queen of martyrs, Queen of confessors," and so on. Those of us who live in countries without royalty may find the concept of Mary as Queen a difficult one to grasp--you can't call Mary the "First Lady" to Christ's "President"! But if we follow the promptings of grace, we will be drawn to understand this concept, and we will acclaim Mary as our heavenly Queen, a sure refuge, a help for all Christians.