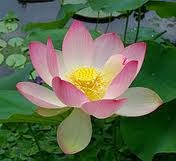 Q: I notice you have posts about things you do at Christmas, but how do you celebrate the season of Advent?
A: We have a lot of things we do during the Advent season. Primarily of course we pray and keep a special silence, awaiting the coming of Christ. The Advent liturgies and Mass readings give us much to contemplate.
We also put up an Advent wreath. Actually, we have about three: one in the chapel, one in the refectory, and one in the novitiate. The candles on the chapel wreath are lit for Mass and Morning Prayer and Vespers; the refectory wreath candles are lit for our evening meal (and accompanied by special prayers) and the novitiate traditions vary according to times and circumstances.
We do some penance during Advent. Advent is not a major penitential season like Lent, but it is a time for doing some extra little things to help prepare for Christmas.
During many Advent seasons, one of the matachines groups from our local parishes comes out and dances for us in honor of Our Lady of Guadalupe. This is always an exciting event!
Q: Do you go Christmas caroling?
A: We save Christmas carols for the Christmas season. When we sing during Advent, we sing Advent songs and hymns like "O Come, Divine Messiah" and "O Come, O Come, Emmanuel" (just to name two most people know). We often go caroling through the monastery during the Christmas season (that's December 25 until the Baptism of the Lord) and it's a lot of fun! Not too cold either because we mostly stay inside!
Q: OK, I'm curious. What about Santa Claus?
A: Being Dominicans, we take a theologically nuanced view of this concept. Of course we know there was a St. Nicholas who (according to questionable legend) not only supplied poor but deserving girls with much-needed dowries, but also attended the Council of Nicaea and defended the true faith against the Arian heresy. So, in a sense, yes, we believe in Santa. But we don't exactly decorate with images of Santa Claus, or even St. Nicholas (although OK, yes, we have a few little things...). Hey, we don't even start decorating for Christmas until about December 22! That's part of keeping the spirit of Advent. And when we decorate, we have mostly nativity scenes or creches, with Mary and Joseph and the baby Jesus and later the wise men, instead. That's the way we operate. But there's nothing wrong with Santa, or St. Nick, as long as you look at the whole picture of what Christmas (and Advent) is all about...which is the coming of Christ into our world, to save us. 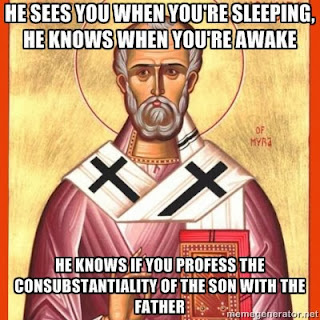