Solemnity of the Epiphany, 2014 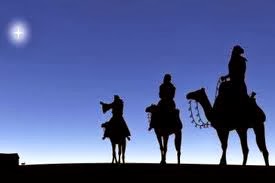 Liturgically, this celebration focuses on the arrival of the Magi, first at the court of King Herod and then at the dwelling place of the Holy Family. Religious art almost always depicts the Magi arriving at the stable where Jesus was born, but the Gospel says only that the star led them to the place where the child was. It is equally uncertain whether Jesus was still a baby or perhaps a small child--at least two years old or older!

The early Church Fathers identified two other events as Epiphanies: Christ's baptism by John the Baptist and Christ's self-revelation at the wedding at Cana. Much has been written and preached about regarding these events, but there are other epiphanies in the course of Christ's life--his appearance to Mary and Joseph at his birth, to the shepherds who came in obedience to the angel's command, to Nathaniel whom Jesus saw under the fig tree, to Nicodemus to whom the working of the Spirit was revealed, to the blind, the lame, the deaf, the leper, the sinner, all of whom were given new life. And then there was Peter, to whom the Father revealed the truth of Jesus' Divine Sonship, and Peter with James and John who saw Jesus transfigured. There was Mary Magdalene, who first saw the risen Lord, and the disciples on the road to Emmaus who recognized Jesus in the breaking of the bread.

In all these "epiphanies" there is always an element of surprise, of unexpectedness, that captures and holds the attention of the recipient so that Jesus is able to act in his or her life. The opening antiphon at the Liturgy of the Hours for today declares: "Christ has appeared to us..." It does not say: "Christ will appear..." He has appeared to us--to you and me, not once, but often--even daily. Have you noticed? If you do, you will see what he has done for you.