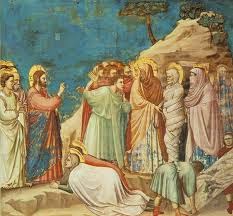 Today's Mass readings are all about life and resurrection--a preparation for the celebration of Easter which is coming so quickly. It is a comforting theme in the midst of Lent, but Jesus' words and actions in the first part of the Gospel are unsettling. When Jesus hears of Lazarus' illness, he doesn't immediately go to him; he doesn't tell the messenger, "He will live", as he had done on previous occasions; he simply says, "This illness is not to end in death, but is for the glory of God, that the Son of God may be glorified through it." And Lazarus did die, and was in the grave four days before Jesus came to see what was happening.

Often, we are in situations similar to that of Lazarus, where everything seems lost--spiritually dead--and we ask ourselves, "Where is God when I need him? He helped other people, why doesn't he help me?" This was the question Martha and Mary asked, indirectly, saying, "Lord, if you had been here, my brother would not have died." It seems that Jesus is doing several things here. First, he is leading us to a deeper faith. It is one thing to heal a blind man or multiply bread and fish for the multitude; raising the dead is the clincher, so to speak. When the Jews saw this miracle, many more believed in him. Second, he is reminding us that God does not necessarily give the answer we are hoping for in our prayers. God knows better than we do what we need and when we need it, and what will give him the greater glory. This is a hard concept to accept! Finally, the raising of Lazarus is a sign of what Jesus himself will do in a short time--but it is only a shadow of the reality. While Lazarus eventually died again, Jesus rises from the dead in order to live forever.

When we have seen our cherished plans, our hopes and dreams buried in the tomb, Jesus stands with us and shares our sorrow. But at the same time he reminds us that there must be a painful death in order to bring forth a new and resurrected life. It won't be the same as the old life--it will be different, and perhaps hard to get used to. But in the end we will be able to give God the glory, and say with Martha, "I have come to believe that you are the Christ." As the Lord tells us in the book of Revelation, "Behold, I make all things new."