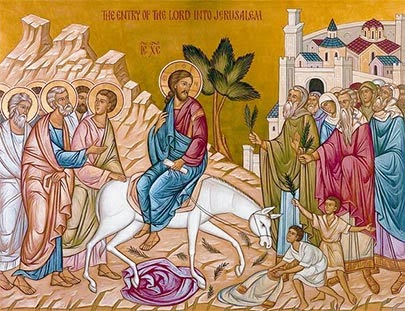 Knowing that his hour had come, when he would make the solemn sacrifice of his life for us, Jesus asked for a donkey on which to ride into the city of Jerusalem.


In ancient times donkeys were used in battle, but later, when the horse took over this function, the donkey was used only in peaceful pursuits; hence, the symbolism of a king mounted on a donkey as a prince of peace. The rich possessed herds of donkeys, but every Israelite farmer was presumed to have at least one (cf. Ex. 20:17).

Many of the crowd that greeted Jesus had witnessed the miracle of Jesus raising Lazarus from the dead after being in the tomb four days: "Only a man of God could do such a thing!" Songs of joy rang out as the people sang: "Hosanna to the son of David! Blessed is he who comes in the name of the Lord!"--the King of Israel, the Messiah King!

Recognizing Jesus as King means accepting him as the one sent from God who shows us the way; the one in whom we can trust and follow. It means accepting him day after day as a valid criterion for living life, the one to whom we could submit because his authority is one of truth.

The procession of the palms is primarily an expression of joy. Today, as in the time of Jesus, it gives us an opportunity to acknowledge Jesus as our Lord and Messiah King and to say "Yes" to him who invites us to follow him. Let us ask for the grace to follow Jesus. It will mean taking up our cross each day and laying down our life for the glory of God and the good of our neighbor--that is, forgetting myself, that I might give of myself in love. I can do this because he has first loved me.