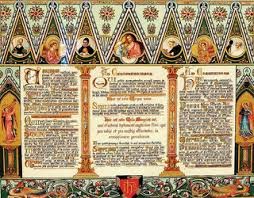 We had the rare privilege of a Dominican Rite Mass celebrated in our monastery today! The celebrant was Fr. Thomas Crean, OP, a Dominican friar from England (we hope to bring you more on him soon). It was a low Mass, but we did sing the Sanctus and Agnus Dei, as well as a communion hymn and a closing hymn--this last because of course we have exposition of the Blessed Sacrament after Mass each day until about 8 PM when we have Benediction. A friend of Fr. Thomas from England was the very capable server and (fortunately for us) said all the responses. For those who don't know, the Dominican Rite Mass is always in Latin because it was suppressed after the changes of Vatican II and never adapted into the vernacular.  However, after the Tridentine Mass was allowed again, so too were other Latin Rite Masses, including this one. Until the late 1960s we had the Dominican Rite Mass in our monastery, so there were some sisters who remembered when to kneel, when to stand, etc., and were able to give the rest of us a little prompting when needed! Our altar is situated in the center of our sanctuary, so it was easy for Father to celebrate Mass facing east. If you are interested in the Dominican Rite, we urge you to check out the Dominican Liturgy blog here. There are also videos and other resources you can explore! We don't know when or if we will have Mass in Latin again here, but it was certainly a wonderful event--and a pleasure to experience the traditional Dominican Rite Mass which many of us here have heard about but never actually attended. Deo gratias!