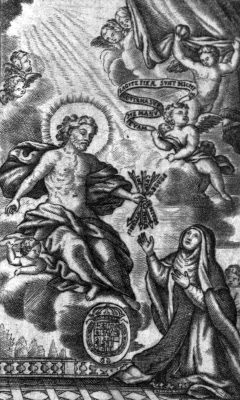 Blessed Margaret of Savoy was a fifteenth century Dominican nun. She was (as her name reveals) a member of the royal house of Savoy and related to all kinds of kings, queens, and even an antipope (Clement VII). Although she had always wanted to be a nun, she married Theodore Paleologus, marquis of Montferrat, for reasons of state. Their marriage was reasonably happy and after his death she resolved not to remarry. She was 36 at the time. She first became a Dominican tertiary and later, by permission of Pope Eugenius IV, a Dominican nun. She formed a community at Alba and lived there until her death.

Margaret had a difficult life as a nun. Early in her religious life, she had a vision of Christ offering her three arrows labeled "Sickness, Slander, Persecution" and she suffered from all three of these. However, she saw God's hand in all her trials, and was able to carry on. Margaret is a good companion during Advent for two reasons. First, she was able to work cheerfully and devotedly for God under all circumstances, traits so needed during this season when we should all be happy and full of joy but when it is also easy to become depressed or angry. Second, Margaret had a pet deer that used to follow her around (yes, even indoors) and keep her company, even running errands for her when she needed things done. The deer would knock on a sister's door when Margaret needed her, and then lead the sister to Margaret. This is a bit farfetched, but at this time of year when we sing happily of flying reindeer, it doesn't seem entirely improbable! (Or does it?) Let us continue on our way with Margaret and all the holy Dominican women this Advent, who looked forward to the birth of Christ not only in time but in their hearts and souls.