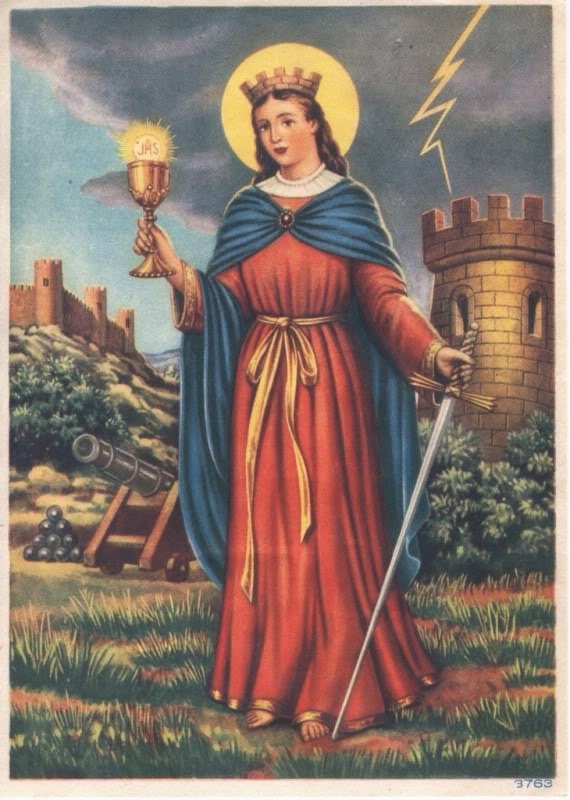 St. Barbara was one of the Fourteen Holy Helpers in medieval times, especially invoked against sudden death (which is why she has become the patroness of electricians, artillery gunners, etc.). Although she was removed from the General Calendar of the Catholic Church in 1969, she is still venerated by the Eastern Orthodox and the Anglicans. Barbara was a martyr, possibly in Greece, who converted to Christianity against her father's wishes and was later killed by him. A bolt of lighting struck him dead as soon as he had killed his daughter. St. Barbara is also the patroness of builders and architects, because she proclaimed her new-found faith by insisting on the addition of a third window in her new bath house--three windows to honor the Holy Trinity. We have a statue of St. Barbara in the infirmary of our monastery, possibly as a holy reminder of the fragility of life.

St. Barbara is an Advent companion because she was a woman of great integrity. When she found the truth, she lived it, regardless of the consequences. And she proclaimed her faith to the world through her willingness to die rather than give it up. In the times we live in, our Christian faith is often held up to mockery and hatred. May we, like St. Barbara, find the courage and singleness of heart to hold fast to the faith in the face of so many temptations to take the easier road, to lead a quiet life, to keep silent. May we call out from our modern-day towers, "Throw open the third window / In the third name of God." (G.K. Chesterton)