This year our postulant Cloe gave the sermon. It's very lovely and so we decided to post the entire thing! 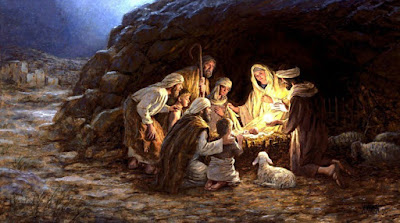 2000 years ago, on an ordinary night in an ordinary place, something truly extraordinary happened. In a normal field, shepherds were tending their flocks. They were normal men, ordinary Jews, and like all Jews they were awaiting the coming of the Savior. But they were simple shepherds, not priests or rabbis, and probably didn't give the coming of the Messiah much thought. But when they did think about it, they probably expected him to be a savior like the ones the Jewish people had had before: a great leader like Moses, a great king like David, a great prophet like Isaiah.

And then one night the unexpected happened. An angel of the Lord, surrounded by the glory of God, appeared to the shepherds, and they were understandably afraid. But the angel told them, "Do not be afraid; for behold, I proclaim to you good news of great joy that will be for all the people."  The shepherds were surprised by this announcement: what was this good news that an angel was proclaiming to them, simple peasants? Then came the news all Israel had been waiting for: a Savior has been born, one who is both Messiah and God.

The surprised shepherds wanted to know where and how they could find this Savior. And then came the most surprising news of all: "you will find an infant wrapped in swaddling clothes and lying in a manger". We're so used to the nativity story that it's hard for us to realize how completely unexpected and astonishing this proclamation was. The people of Israel were expecting a Savior who was a great, strong leader, and instead God came as a vulnerable little baby. They were expecting someone from a great family with lots of material wealth and prestige, and instead God was born to a poor, simple couple. They were expecting someone with great political power, confronting their Roman oppressors in Jerusalem, but instead the Messiah was born in the small town of Bethlehem and visited by peasants and Gentiles. But as Pope Francis wrote, "Let us allow God to surprise us. He never tires of casting open the doors of His heart." (MV 25)

In this jubilee year of mercy, it is fitting to look at the surprising nature of the nativity story as an act of God's mercy. Of course, the whole of salvation history is an act of mercy. God prepared the way with prophets and leaders who taught His people how to stay close to Him. And the Incarnation was the supreme act of mercy, God becoming human to save humanity. His coming was specially prepared with Mary's immaculate conception, then began with the annunciation, then Jesus' birth, His earthly ministry, culminating in His salvific passion and resurrection. But Jesus' birth was a particular act of mercy, not just that He came but how He came, and reveals how God is a God of mercy. As the great apostle of mercy, St. Faustina, said, "The greatest attribute [of God] is love and mercy. It unites the creature with the Creator." And in Misericordiae Vultus, Pope Francis writes that mercy is "the ultimate and supreme act by which God comes to meet us." (MV 2)

God's mercy is revealed in how He came to meet us, in the incarnation as a little baby. He didn't come as a powerful warrior or political figure, but as a vulnerable infant who needed other people to take care of Him. In His mercy, God humbled Himself to take on our human nature in order to redeem it. It might have been easier for Him to come as a strong adult, but He knew that, ultimately, it would be easier for us to accept Him as Savior if He came as a baby. There is something intrinsically appealing about a baby. Because they are so cute and vulnerable, we feel comfortable approaching them. It's easy to imagine meeting the baby Jesus, wrapped in swaddling clothes like any other normal newborn. We are drawn to Him in His vulnerability, and more easily accept Him in His helplessness and littleness. His vulnerability requires others to take care of Him, and shows that God's mercy allow us to work with Him in salvation.

There was also great mercy in the Savior choosing to be born into a poor family. He could have chosen a family of great wealth and power, but instead He chose Mary and Joseph, poor peasants from the small town of Nazareth. In His humility, God knew that the Savior needed to be someone everyone could relate to, a simple and approachable man, so in mercy He chose to be born to simple, approachable people. Jesus, both as a baby and as a grown man, presented Himself as a normal person whom everyone felt comfortable coming to. From the shepherds in the field to the lepers who needed His healing to the sinful who needed His forgiveness, Jesus welcomed everyone regardless of status. Even today, I think most of us picture Jesus either as a normal baby in a blanket or as a simple carpenter in peasant robes, which makes Him much more approachable to us in prayer than if we had to picture Him as a powerful king or cryptic prophet.

God also showed His mercy by revealing Himself as a baby to a variety of people. He could have hidden Himself away for decades until He was ready to begin His ministry, but instead He sent angels to announce the birth to the shepherds and sent signs so that even the foreign magi would know of the Savior's birth. This revelation of His birth showed that His mercy and salvation is for everyone, including Gentiles. Previous prophets and kings had been just for the chosen people, but in Jesus, the ultimate Savior, God finally sends salvation for everyone. God's mercy is overflowing generosity, embracing everyone with His love and forgiveness.

Pope Francis called this jubilee year of mercy because, as he wrote, "at times, we are called to gaze even more attentively on mercy so that we may become a more effective sign of the Father's action in our lives." (MV 3) So this Christmas, let's contemplate how the nativity story shows God's mercy so that we can learn how God wants us to be merciful to each other. By God becoming incarnate as a vulnerable baby to a poor family, He made Himself much more approachable to us, those whom He came to save and serve; just so, we must do what we can to make ourselves approachable to those we wish to serve in mercy. Jesus' birth was first revealed to peasants and Gentiles, not the Jewish elite, showing that God's mercy extends to all, not just those who may seem most worthy of it. In imitation, we must show mercy and care to everyone, not just those we are comfortable with helping or think deserve it.

At Jesus' birth, the angels sang, "Glory to God in the highest, and on earth peace to people on those whom His favor rests." God's favor and mercy rest on everyone, so Christmas especially is a time for all of us to come together to reflect on the peace and mercy God has for us in our treatment of one another.