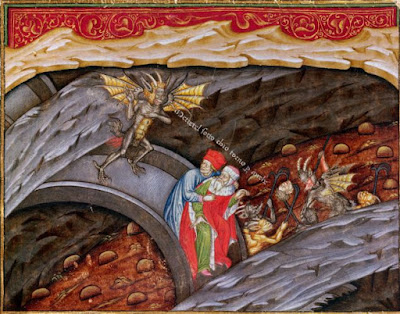 The third of our Four Last Things is hell. Hell is the "state of definitive self-exclusion from communion with God and the blessed" (CCC 1033). The Church teaches that hell does exist, but there is no way of knowing who is (or who isn't) in hell while we are on earth.

When we were looking for an illustration of hell, we had to reject most of what we found (too gruesome!) and went with this illustration from Dante's Divine Comedy. This is particularly appropriate, though, considering that Pope Francis has urged the faithful to read (or reread) the Divine Comedy during this Year of Mercy. In the section on hell, Dante writes that once judged, the damned actually run to their assigned places in hell, anxious (as it were) to begin their punishment. Note what the Catechism said above: it is a state of self-exclusion. Anyone who winds up in hell has freely chosen this place of torment by his or her own actions, which caused a definitive rejection of God and His freely offered mercy. The Catechism continues:"God predestines no one to go to hell; for this, a willful turning away from God (a mortal sin) is necessary, and persistence in it until the end." (CCC 1037) Rather, as St. Paul writes, God "desires all men to be saved" (1 Timothy 2:4) and so He is always extending His mercy to those who are willing to accept it. In the Mass and the daily prayers of the faithful, "the Church implores the mercy of God, who does not want 'any to perish, but all to come to repentance' (2 Peter 3:9)." (CCC 1037) In the time we have remaining in this Advent season, let us make an effort to turn back to God before it is too late and our habitual sins may have made it impossible for us to accept the mercy He offers us at every moment.

Excellent article by Bishop Robert Barron on Dante and the Divine Comedy here.