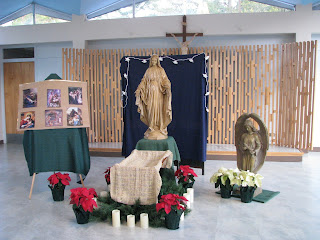 Every year on the morning of Christmas Eve about 6:30 we gather in the Chapter Hall, (a large room for solemn monastic occasions) . There is a special reflection, usually given by one of the younger Sisters. This year it was given by our Novice, Sister Mary Therese. It was very good and you can read it below the next photo. 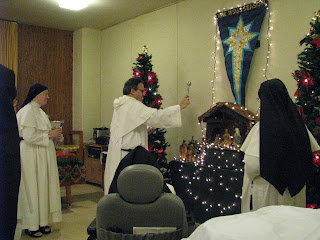 Also, each year on Christmas Eve after Vespers (Evening Prayer), our chaplain comes in and blesses the Nativity Scenes in the Community Room and Refectory (dining room).

This year, the Dominican Order celebrates the 800th anniversary of its founding. St. Dominic founded an Order 800 years ago dedicated to preaching the truth of the Gospel. Specifically, he wanted to preach the Gospel to the Cathars--heretics who believed in a dualistic reality in which matter and spirit were opposed to each other, with matter being evil and only spirit being good. Our Order was initially established to combat a heresy that the miracle of Christmas challenges.
What is so special about Christmas? Why is Christianity the only religion that celebrates the birth of its founder, a birth that happened decades before Christs really "did" anything, things that identified Him as a religious leader such as preaching and performing miracles? Of course, the conception and birth of Christ is itself a miracle. The Virgin Mary conceived by the Holy Spirit and bore Jesus Christ, God made man.
But the fact that God became a man at all is an even greater miracle. We Christians, 2000 years later, are accustomed to the idea of God becoming man. It is hard for us to understand how truly shocking this event was. Why did God come to earth as a baby? What would have happened if He had come to earth as a grown, powerful man, as one would expect a God to do it He came to earth at all? And why DID He come to earth as a man at all? Could He have saved us just as a divine, spiritual being? What's so important about our physical nature that God wanted to redeem that, too?
God is spirit, with no physical nature, and thus it is tempting for us to dismiss the physical as "lesser," particularly as it is easier to see the flaws, brokenness, and messiness of the physical world. The spiritual world is exalted, esteemed, even mysterious, which makes it seem better and more important than the physical. But God created the physical world, and God created all things good. God Himself values the physical, natural world; He created it and wants it to exist and be saved.
With the celebration of Christmas, we are reminded of the goodness of the world. God chose to come to earth as a human to redeem our humanity. He wanted to redeem not just our souls but our bodies as well. And He did that by living as a normal, physical human being, which includes coming into the world as a baby, just like everybody else does. From the day of His conception to the day of his crucifixion, Jesus endured all the suffering and messiness of a physical body in our fallen world. He chose to come to earth through a physical mother, instead of descending from on high in a glorified body. He lived nine months in Mary's womb and then was born, coming t\into the physical world the same way every other human being does. He then experienced childhood and all of the growing pains and scraped knees that every other child has. As an adult, He endured hunger and thirst and extreme discomfort during His mission of preaching and healing. And during His passion, He suffered unimaginable physical and emotional pain. And in experiencing a fully physical human life, Jesus redeemed humanity in both our bodies and our souls.
Christmas is a celebration of the goodness of the physical world, because we celebrate God's great decision to incarnate as a physical human being in order to redeem the physical world. God created the natural world, and He created all things good. The natural world is now fallen, yes, but it is still fundamentally good and worthy of redemption. God created us as both body and soul; we are embodied souls. The "real me" includes both spiritual and physical natures, and we are not truly human without both. Even in the next life, we are promised a resurrection of our bodies, so that our physical and human natures will be forever united in the Kingdom of God.
The miracle of Christmas proves that God loves us completely, both body and soul. He loves us more than we love ourselves. It is we humans who are tempted to reject the physical, in all its ugliness and pain. But God loves our entire humanity. He wants our spirit, but He also wants our body. At Christmas, we celebrate the incarnation, in which God embraces our human nature with complete love and acceptance, in all our frailness and woundedness. Christmas is a celebration not just of Jesus becoming human, but of all  of us being created in His great family of humanity, a family He joined to bring together as one body to redeem.