During this 2016 Lenten season, we will have a short series on Prayer, one of the three traditional spiritual practices, along with Fasting and Almsgiving.

The passage from Exodus 17:11-12 has special meaning for our community: 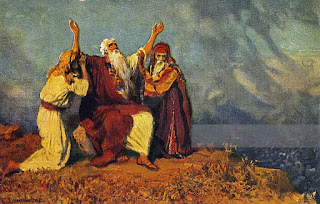 A good number of years ago, it was this passage that encouraged us to begin having a personal retreat day each month for all of our Sisters. In some monasteries it is called a "hermit day". We call it a "Moses Day" because Moses spent the entire day praying for victory for Joshua and the Israelites. When his arms grew tired, his companions helped him. Thus, the Sister who is in retreat stands before God in prayer for not only the world, but the community as well.