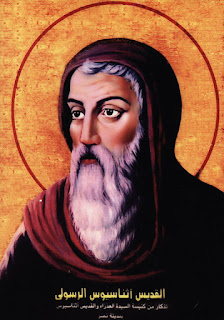 He was a great leader of Christianity in the 4th century. While exiled 5 times by the Arian heretics, he met and later wrote the life of St. Antony of Egypt, who is considered the "father of monasticism".

Athanasius was also famous for his teaching on the Incarnation and was instrumental in the success of the First Council of Nicaea (325). Our chaplain shared a good quote from him during his homily this morning:
"Instead of arming yourselves with swords,
extend your hands in prayer."