We had only just finished consuming the last chunk of the big watermelon, when a friend from the Dallas area showed up yesterday morning with FIVE watermelons!!!!!

Sister Mary Veronica had been praying for more watermelon; and when she starts praying ... watch out! 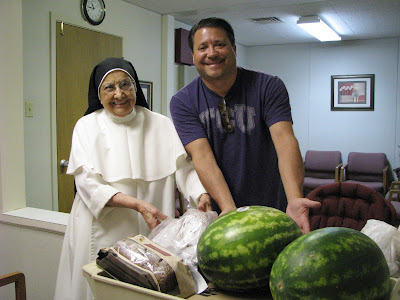 We are constantly thanking and praising God for the way He takes care of us and provides for our needs, ... even ones we don't know we have.

One of the Sisters went to the Laundry after dinner and smelled something strange. She did not have time to check it out because it was time for her Eucharistic adoration.

The memory of the strange smell kept coming back to her during adoration. So as soon as she finished she went to find our workman, David. He went to the Laundry and the smell was even worse. "It's an electric burning!" he diagnosed. The Sister and he began to feel the walls to find where it was. David found it with an "Ouch!" It had become very hot. The electrician that works on our A/C was called and quickly fixed the problem.


PRAISE GOD Whose hidden Providence saved us from a fire. Another providential moment was to realize that it the burning had happened at night, it probably would have burst into flame.

Thank you GOD,
St. Joseph and all our Guardian Angels
for protecting us from fires!