Retreat in the Desert

The Nuns are making their annual retreat from September 13-20. Many people laugh when they hear the nuns are going on retreat. "Aren't you in a perpetual retreat?!"  Well, yes. But we do live in community, and sometimes we need more solitude than we normally have; as well as extra silence and time for prayer, reading, and simply resting.

We usually have a "preached" retreat in which someone preaches to the entire community twice a day on aspects of the spiritual life, plus the homily at Mass ties in with the theme of the retreat. Another kind of retreat might be a "directed" retreat, in which a person might meet daily, or every other day, with a Retreat Master and share privately what he or she has been praying about. 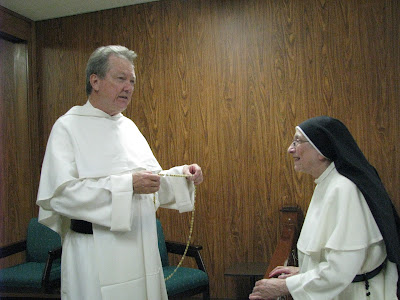 In the photo above, Fr. Emmerich is explaining where he obtained his white rosary.

Our retreat Master this year is Father Emmerich Vogt,OP, from the Western Province headquartered in California. We had never met him before so when he arrived Tuesday afternoon we arranged to visit with him, before "going into the desert" Wednesday morning. Although Father Vogt is originally from Connecticut, he has lived most of his life in California. He has had various ministries: parish work, Provincial, chaplain for our nuns in Los Angeles, and now giving retreats and workshops throughout the country, and world.

The theme of our retreat is "Liturgical Asceticism".  We are enjoying the retreat and Father Emmerich's very thought provoking reflections. He is funny yet profound. 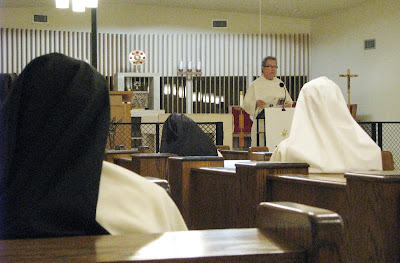