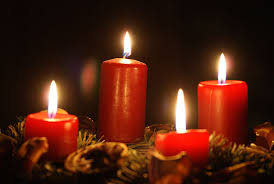 In our Monastery, we like to keep the Season of Advent as much as possible. We begin to decorate for Christmas only a few days before Christmas. This year was unusual because the Fourth Sunday of Advent was also Christmas Eve.

Christmas Eve is the threshold into the great Season of Christmas. We begin the day with an ancient monastic custom of Solemn Chapter after Morning Prayer. The Christmas Proclamation from the Roman martyrology* is sung by one of the nuns and a sermon given by another nun on the Mystery of the Incarnation.

*In olden days, this was a reading of all the saints to be celebrated the following day.


A Traditional Translation of the Christmas Proclamation
On the twenty-fifth day of December;
In the year five-thousand one-hundred and ninety-nine from the creation of the world, when in the beginning God created the heavens and the earth;
In the year two-thousand nine-hundred and fifty-seven from the flood;
In the year two-thousand and fifty-one from the birth of Abraham;
In the year one-thousand five-hundred and ten from the going forth of the people of Israel out of Egypt under Moses;
In the year one-thousand and thirty-two from the anointing of David as king;
In the sixty-fifth week according to the prophecy of Daniel;
In the one-hundred and ninety-fourth Olympiad;
In the year seven-hundred and fifty-two from the foundation of the city of Rome;
In the forty-second year of the reign of the Emperor Octavian Augustus;
In the sixth age of the world,
while the whole earth was at peace—
JESUS CHRIST eternal God and the Son of the eternal Father,
willing to consecrate the world by His gracious coming,
having been conceived of the Holy Ghost,
and the nine months of His conception being now accomplished,
was born in Bethlehem of Judah of the Virgin Mary, made man.
The birth of our Lord Jesus Christ, according to the flesh.

Our Sister-Preacher this morning gave a beautiful talk in poetic form which we would like to share with you. To read it,just go to the next picture and it is below it.

Also, on Christmas Eve after Vespers, our Chaplain usually comes inside the enclosure and blesses the Nativity Scenes in our Community Room and Refectory.

One dark night,
Fired with love’s urgent longings
Ah, the sheer grace!
I went out unseen,
My house being now all stilled
A canopy of stars puncturing the black sea of space
The eyes of the animals transfixed
Transfixed on the newborn baby in their midst
Did they think of Noah perhaps?
The Noah who spared their species when the dark seas of earth
Raged over the landscape with unrelenting fury?
Obliterating the stain of somber memory?
A new heavens and a new earth.
In silence he comes forth
Unseen
Shrouded
Obscure
Poor
“Behold I make all things new”

On that glad night
In secret, for no one saw me.
Nor did I look at anything
With no other light or guide
Than the one that burned in my heart
A frigid chill with its high-pitched scream
forces its way in between the timeworn slats of their dilapidated shed.
Yet, a light shines in the darkness
And the darkness does not overcome it.
Here burns the true light of the world
Like the dove
Creating in the hushed silence of primordial earth
Here burns the light of the world
The quiet voice raised above the din to meet Elijah’s waiting ear
“I am the Alpha and the Omega
The beginning and the end”
“How long have I loved you beauty ever ancient ever new
How long I have loved you.”
The slow counting of eons gone by
All consumed with a single purpose
Each expectation whose signs may be read in constellations and stars,
In giant expanse or a grain of sand.
In the time deemed right by Thine omnipotent hand
The time has come
Has come to save.

“Who is man that You take notice of him
Or the son of a man that You make account of him?”
The Word made flesh
Clothed in the creature He had made
Reaching out with love’s silent longing
To grasp the rag enfolding Him
With hands no bigger than a pebble on the shore of the sea
He comes:
Vulnerable
Lowly
and Fragile
“But now, O Lord, You are our Father;
We are the clay, and You are our potter;
And we all are the works of Your hand. (Isaiah 64:7)”

Upon my flowering breast
Which I kept wholly for Him alone
There he lay sleeping
And I caressing Him
There is a breeze from the fanning cedars.
The crunch of dried hay beneath footsteps
A cloud, like smoke, escapes the lips that are cold and dry
Bursting and shredding it explodes upon the scene
Smothering the voice of the cricket in the night
The eyes of the shepherds
Stabbed with light
Behold an angel praising glory
Glory to God in the Highest and Peace to men of good will.

After the angel
Stillness
Stillness except for one thing
The bleating of the innocent lambs
A sacrifice for a forgotten temple
While their true Master and Creator
Was flogged without mercy
In its wake
Amid their cries for freedom.
Humanity
No longer saved by the reddened door posts of old
Or the staff resting in Aaron’s hand
To pay the ransom we had incurred
The ransom so many knew not when.
Such is our life
And such is our hope
Imperceptible
For now, in peaceful slumber,
Cruelty hides its wrath
For now, the creatures have their king
For now the Shepherds and angels adore
And
For now, a single kiss
That will soon give way to a crown of thorns
For now he is Lord
King of the Universe
He is our salvation and redemption
Our God
Of beginning and eternal end.

A hand pressed into an arm
Shivering from want

The mother picks up the child for the shepherds to see

I abandoned and forgot myself
Laying my face on my Beloved
All things ceased; I went out from myself
Leaving my cares
Forgotten among the lilies.

I came to bring fire upon the earth,
and how I wish it were already kindled! (Luke 12:49)”