This week has been one of many blessed events, unfortunately we are a little slow in recording them. We will try to keep up with God's shower of graces!!

Not only is the Feast of the Epiphany a deeply significant religious day, it is also our day of sharing fun and gifts with one another. The Professed Sisters entertain the community in the morning and the Sisters in the Novitiate usually have the evening. 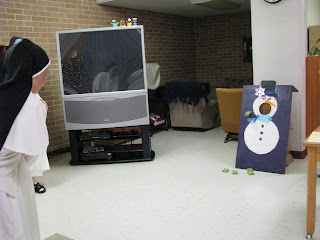 The Professed Sisters are champions at providing enjoyable games for us. We divided into three teams and began with a bean bag toss. Poor Frosty the Snowman didn't get much to eat. 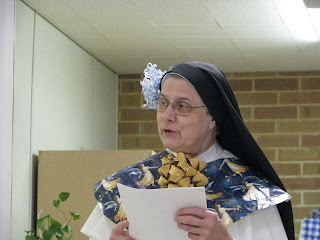 Our two MCs were right in the Christmas spirit. They explained their unusual costumes by saying that they were living in the PRESENT! 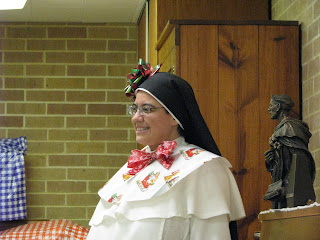 Sister Mary Margaret, on the left, is filling us with funny puns; while on the right, Sister Mary Gabriel enjoying the bean bag toss. 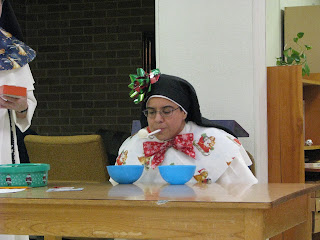 In the photo above, Sister Mary Gabriel is demonstrating how to move 10 ping-pong balls from one bowl to another. In the photo below, Sister Mary Jeremiah is racing to get the task completed in the time allotted ... which she did. 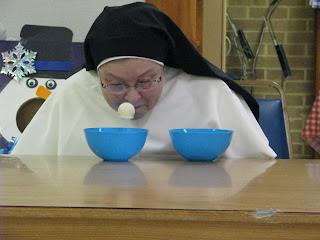 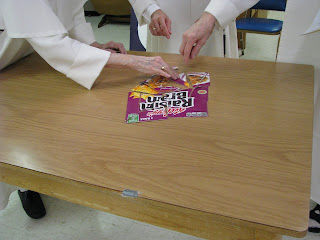 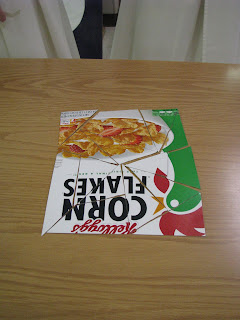 The morning concluded with an hilarious game with gift bags. This game has become something of a tradition because it is so much fun. We each received a bag filled with mysterious goodies. But to keep us from becoming too attached or selfish, we had to move them around the circle while a Sister read us the poem of "The Night Before Christmas". This version was annotated with many "lefts" and rights". Every time one was mentioned we passed the bag in the correct (sometimes) direction. By the end of the poem the original bag was half way across the room. You might want to try it next year. It is lots of fun with many laughs and goofs. 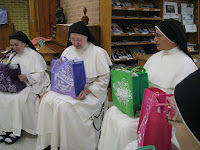 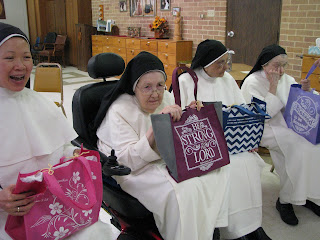