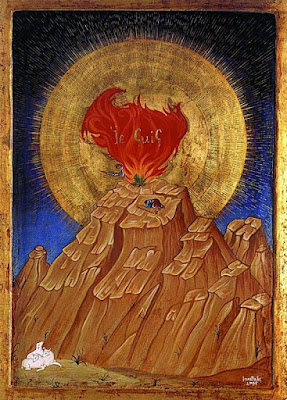 Etienne Gilson, a great Catholic philosopher of the 20th century, wrote that this verse from Exodus 3:14 where God gives Moses His name, He Who Is, “the whole of Christian philosophy will be suspended.” It is the most ontological (philosophy of being) verse in the entire Bible. Medieval Scholastics identified the ehyeh (I AM) of 3:14b as the Divine name that expresses the most fundamental essence of God, which essence they identified as “subsistent being itself” (Latin “ipsum esse subsistens”). It means that God is Absolute Being, nothing exists outside of Him. St. Thomas quotes St. John Damascene as saying ehyeh (translated “He who is” from the Septuagint “ho on”) is the “most appropriate” of all divine names (De fide orth I.9). the words ehyeh asher ehyeh (above in Hebrew) are understood in Roman Catholicism to bear the meaning: “I Am He Whose Essence is expressed in the words “I am”; and he continues: “God is therefore purely and simply being. His Essence is Being”. Thus, Aquinas saw in it an allusion to God’s absolute and eternal being.

For another article on this same theme, click HERE.