The solemnity of the Annunciation 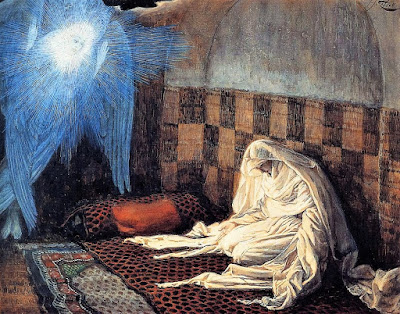 Today is the Solemnity of the Annunciation. There is an ancient monastic custom of having solemn meeting in honor of the two great feasts of the Incarnation -- Annunciation and Christmas.  This year our sermon was given by Sister Mary Therese. she has recently moved to live and work with the Solemnly Professed nuns as another step in her monastic journey. Sister spoke of the pivtoal moment of the Annunciation by the angel Gabriel when Mary said, "Yes". 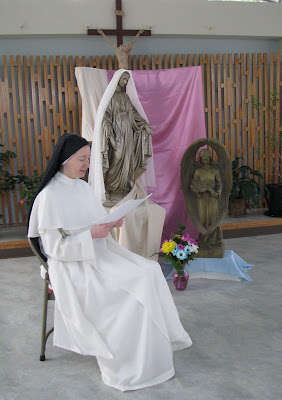 Below, we have the text of Sister's sermon in honor of the Annunciation, 2019.

The Annunciation is one of the most important events in the story of Christ. It not only begins His life on earth, but also begins Mary’s life as an example to all Christians for how to respond to God’s call. Mary didn’t choose her life, she was chosen for it. The only thing she had control over, how she used her own will, was how she reacted to God’s will for her.
Mary didn’t plan the life she ended up living. She was living her life as well as she could, being a dutiful daughter, devoted to God and trying to live her life as much in line with God’s will as she knew it to be. But she had no idea that she was specially chosen, and was probably planning on living a quiet life as a carpenter’s wife, still being free to guide her own life as much as most people are able. But then the Annunciation happened, and whatever plans she had for her life, however minor on the grand scale of things but they were important to her because they were her own, were derailed. God prepared her as much as He could for her vocation and certainly helped her along the way, but nothing could really prepare her for all that being the mother of the Messiah would entail. The decision was God’s, but all the suffering and sacrifice would have to be hers, and the only choice she had, was whether to accept.
Everyone who is following their vocation has had their own annunciation, their own call to the life God has chosen for them. For some of us, the call was a surprise, more of an epiphany coming seemingly out of the blue, derailing our plans for our own life and calling us down a new, uncertain path. For some, the call came more gradually, growing so naturally out of our normal life experiences that it seemed more like our own idea than God’s. But however it happened, the call to the consecrated life was God’s own annunciation to each of us, and we’re all here because we followed Mary’s example in saying “yes” to letting God’s will be more important in our life than our own.
When we enter consecrated life, we give up almost everything that we have: not just our material possessions, but also our time, our independence, our freedom to structure our own lives and make decisions for ourselves, almost everything that we once had to make us who we are and live our lives the way we want to. The most powerful thing any person has is her will, and even this we’re asked to surrender to serve God and for the common good. And we can never really give up our will, nor are we asked to; that would be too easy, and not entail the kind of struggle and growth we have to endure in order to grow in virtue to become closer to God. Instead, we still have our will, but we are continually being asked to give it up, to control it and redirect it away from what we want and instead toward what God wants.
So in a way, consecrated life presents us with many little annunciations every day. Every time we’re asked to do something contrary to what we would have naturally chosen or wanted to do, we are reminded of our vow of obedience, that we chose to answer God’s call to give our entire life—our time, our energy, our will—to Him through community life. And every time, all of our little “yeses” support the big “yes” that we gave to God when we responded to the big call to consecrate our entire life to Him in the first place. And every time we say “yes”, we’re given that opportunity to mirror Mary’s first “yes”.
Of course, sometimes the yes is harder than others, when we’re asked to do something we really don’t want to do or when it conflicts with something we did want to do. But was it easy for Mary to say yes? Was she happy about the Annunciation, or was she terrified? It was probably a confusing mixture of both. True, she experienced a joy and closeness to God that she never would have experienced otherwise, but she also suffered more than she ever thought she would. If it had been only her choice, would she rather have lived a quiet life as a carpenter’s wife, happily letting someone else experience the joy of being the mother of the savior if it meant that she wouldn’t have to suffer the agony of it either? Did Mary want to say yes? Does it matter? Obedience doesn’t come in liking or wanting to do what we’re being asked to do, but in turning our will away from what we want and doing what God wants us to do. So in consecrated life, every time we respond with obedience, we are saying to God, with Mary, “May it be done according to your word” (Lk 1:38).