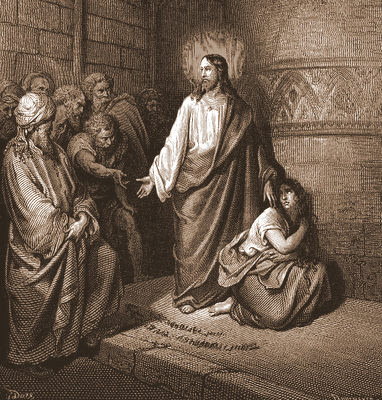 Today's Gospel is from the Gospel of John 8 and the story of the woman caught in adultery. St. Thomas Aquinas had quite a number of insights on this famous passage in his Commentary of John. We will share some of his thoughts here, but if you would like to read more, click HERE.


1125 The Evangelist shows them proceeding with their test.
First, they point out the woman's fault;
secondly, they state the justice of the case according to the Law;
thirdly, they ask him for his verdict.
1126 They point out the woman's fault when they say this woman has just now been caught in adultery. They detail her fault in three ways, calculated to deflect Christ from his gentle manner.
First, they mention the freshness of her fault, saying just now; for an old fault does not affect us so much, because the person might have made amends.
Secondly, they note its certainty, saying, caught, so that she could not excuse herself.
Thirdly, they point out that her fault is great, in adultery, which is a serious crime and the cause of many evils. "Every woman who is an adulterous will sin" (Sir 9), and first of all against the law of her God.
1127 They appeal to the justice contained in the Law when they remark, in the Law, that is, in Leviticus (20:10) and in Deuteronomy (22:21), Moses commanded us to stone such a woman.
1128 They ask Jesus for his verdict when they say, But what do you say? Their question is a trap, for they are saying in effect: If he decides that she should be let go, he will not be acting according to justice, yet he cannot condemn her because he came to seek and to save those who are lost: "God did not send his Son into the world to judge the world, but that the world might be saved through him" (3:17). Now the Law could not command anything unjust. Thus, Jesus does not say, "Let her go," lest he seem to be acting in violation of the Law.
1129 The Evangelist reveals the malicious intention behind those who were questioning Jesus when he says, They said this to test him so that they could accuse him. For they thought that Christ would say that she should be let go, so as not to be acting contrary to his gentle manner; and then they would accuse him of acting in violation of the Law: "Let us not test Christ as they did" as we read in 1 Corinthians (10:9).
1130 Then, Jesus checks his enemies by his wisdom. The Pharisees were testing him on two points: his justice and his mercy. But Jesus preserved both in his answer.
First, the Evangelist shows how Jesus kept to what was just;
secondly, that he did not abandon mercy (v 7). As to the first, he does two things: first, he mentions the sentence in accordance with justice; secondly the effect of this sentence (v 9). About the first he does three things: first, we see Jesus writing his sentence; then pronouncing it; and thirdly, continuing again to write it down.
1136 Then (v 10), he shows that Jesus did not abandon mercy, but gave a merciful sentence.
First, Jesus questions the woman;
then forgives her;
finally, cautions her.
1137 Jesus questioned her about her accusers; thus he says that Jesus rising up, that is, turning from the ground on which he was writing and looking at the woman, asked her, Woman, where are those who accuse you? He asks about her condemnation saying, Has no one condemned you? And she answers, No one, Lord.


1138 Jesus forgives her; and so it says, Then Jesus said: Nor will I condemn you, I who perhaps you feared would condemn you, because you saw that I was without sin. This should not surprise us for "God did not send his Son into the world to judge the world, but that the world might be saved through him" (3:17); "I do not desire the death of the sinner" (Ez 18:23). And he forgave her sin without imposing any penance on her because since he made her inwardly just by outwardly forgiving her, he was well able to change her so much within by sufficient sorrow for her sins that she would be made free from any penance. This should not be taken as a precedent for anyone to forgive another without confession and the assigning of a penance on the ground of Christ's example, for Christ has power over the sacraments, and could confer the effect without the sacrament. No mere man can do this. 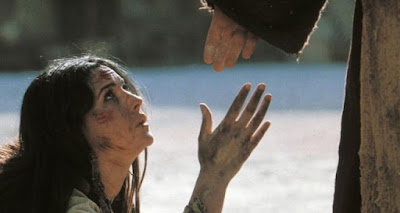 Thank You for Your Justice and Mercy, Lord