The Presentation of the Lord

Like almost all the events of Jesus' earthly life, there are any number of paintings, mosaics, statues, and other portrayals of the Presentation of the Lord in the temple. We usually think of it as a peaceful, tranquil thing; in part because of the artistic conventions surrounding the Holy Family, and perhaps because we prefer to keep this family in a safe place, where no one ever gets upset, no one is ever confused, no one is ever sad. This image offers a different point of view: 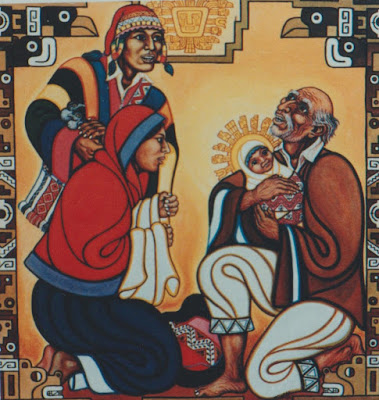 This South American illustration seems to capture more of what the reality may have been. Mothers--if a weird old man suddenly came up to you, grabbed your baby away, and began saying all kinds of crazy things, how would you react? Fathers--what about you? The only calm person in this picture in Jesus, Who understands everything and knows that it has to be this way to fulfill all that has been told about Him.

The Holy Family was not a trio of people who saw the future coming and accepted everything without surprise. Mary was conceived without sin, but she was still troubled to hear that a sword would pierce her heart. Joseph was a just man, but he could not understand everything his foster Son did. Like us, they had to take one day at a time, learning and growing as they remained firmly in touch with God. Instead of thinking, "Well, they were the Holy Family--of course they had no problems!" let's remember that, well, they did have problems. Their Son was lost a second time when he was twelve, and they were upset and confused about that. He was lost a third and apparently final time, and then appeared gloriously triumphant over death on Easter morning. But before that Mary became the Mother of Sorrows. She did not understand, but instead pondered everything in her heart, and so she prepared herself for that final great realization foretold so long before by Simeon in the temple.

Let us, too, ponder the events of our lives in our hearts, allowing time for God to share His understanding with us, remembering that in His plan everything works for good.