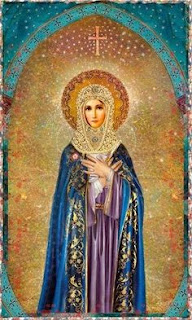 The first star to appear in the evening--and the last to disappear as the sun rises--is not a star at all. It is the planet Venus. Pagan thought connected this planet with the goddess called Venus and had special rites and prayer according to the planet's position in the sky, both over time and in the course of the day. (Because, after all, Venus is still up there, though we can't see it when the sun is shining brightly!)

In his novel Perelandra, C. S. Lewis presented the planet not so much as a pagan deity but as an entity whose aspect is feminine, just as Mars (or Malacandra) was seen as a masculine entity in his novel Out of the Silent Planet. He suggests that the pagans had the right idea about certain things (such as the apparent gender of the planets) although they were very wrong about many other things. But what does all this have to do with Mary?

Mary is called the Morning Star because she was and is the Mother of Jesus. Just as we know morning is coming when we see the stars wink out, one by one, leaving only Venus shining brightly, so too the many prophets and different people who foreshadowed the coming of Christ fade into history as the Virgin Mary takes her preeminent role as the true herald of salvation. Her willing fiat is the first sign of a new creation in the world. At the same time, just as the morning star fades from sight as the sun rises, so too does Mary willingly surrender the attention of the world to her son Jesus, Who is our Savior.

Mary, Morning Star, help me to be aware of when God is asking me to shine and when He is asking me to step back. May I be gracious in allowing others to take the starring role in life when You ask this of me.
Labels: C.S. Lewis Litany of Loreto Mars Mary morning star Venus