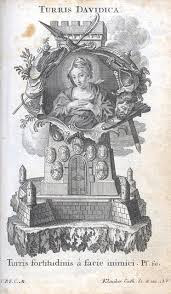 Your neck is like the tower of David,    built for an arsenal,whereon hang a thousand bucklers,    all of them shields of warriors.
Song of Songs 4:4

A tower in its simplest idea is a fabric for defence against enemies. David, King of Israel, built for this purpose a notable tower; and as he is a figure or type of our Lord, so is his tower a figure denoting our Lord’s Virgin Mother.
She is called the Tower of David because she had so signally fulfilled the office of defending her Divine Son from the assaults of His foes. It is customary with those who are not Catholics to fancy that the honours we pay to her interfere with the supreme worship which we pay to Him; that in Catholic teaching she eclipses Him. But this is the very reverse of the truth.
For if Mary’s glory is so very great, how cannot His be greater still who is the Lord and God of Mary? He is infinitely above His Mother; and all that grace which filled her is but the overflowings and superfluities of His incomprehensible Sanctity. And history teaches us the same lesson. Look at the Protestant countries which threw off all devotion to her three centuries ago, under the notion that to put her from their thoughts would be exalting the praises of her Son. Has that consequence really followed from their profane conduct towards her? Just the reverse—the countries, Germany, Switzerland, England, which so acted, have in great measure ceased to worship Him, and have given up their belief in His Divinity while the Catholic Church, wherever she is to be found, adores Christ as true God and true Man, as firmly as ever she did; and strange indeed would it be, if it ever happened otherwise. Thus Mary is the “Tower of David.” --St. John Henry Cardinal Newman