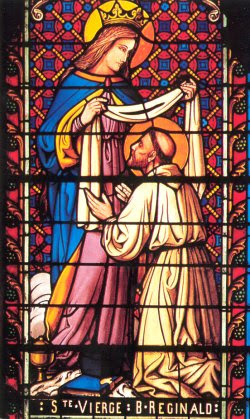 During our retreat, Fr. John Sica, OP reminded us of a few things characteristic of Dominicans that we thought might be interesting to highlight here on the blog. One of these is the Dominican "white scapular".

People sometimes ask us, anxiously, if we are wearing a brown scapular. This refers to the Carmelite brown scapular and its famous promise that those who wear it will be delivered from Purgatory by our Blessed Mother after they die.We usually smile and say, "No, but I am wearing a white scapular."

"It's not the same," they insist. "The brown scapular is the only one that can save you."

There's nothing wrong with wearing the brown scapular if it inspires you to lead a better life, go to Confession regularly, and have a devotion to Mary. But no mere scapular, white, brown, green, or any other color, is a Get Out Of Purgatory Free ticket.

That being said, why do Dominicans wear a white scapular?

A scapular was originally a kind of work-apron, meant to guard the habit from wear and tear and stains. So when St. Dominic began founding the Order, he had his new followers wear a habit like his, which happened to be the habit of the Augustinian canons: a white habit with a white hood (capuce) and a belt, and shoes (sandals are permitted today). There was no scapular, because they weren't planning to do a lot of manual work. Their work would be intellectual.

And then Blessed Reginald of Orleans came on the scene.

Reginald was a priest and a canon lawyer before he met Dominic in Rome, in about 1218. He was dissatisfied with his somewhat worldly life and wanted something more, and had long conversations with Dominic about the new Order of Preachers. Still, he remained undecided until he fell extremely ill. One evening, as he lay on his sickbed, he had a dream in which the Blessed Virgin Mary came to him and anointed him. Holding out a Dominican habit, she also told him that if he put on this garment he would be saved. Our Lady's version of the habit included a white scapular. When Reginald awoke, he was completely cured. He entered the Order and received the habit--with the white scapular added. And Dominicans have worn this white scapular ever since. (Usually with hands neatly tucked under.)

So, Our Lady plays a big part in the Dominican devotion to the white scapular, which (unlike most work aprons) is formally blessed when a brother or sister makes profession. Sometimes Dominicans even say (modestly) that the Dominican habit is special because it was a particular gift from Mary.

But why don't Dominicans go around promoting the white scapular? Well, as we mentioned above--it's a part of the habit. It is also given to members of the Dominican Laity when they make profession as a sign of their part in the Order. It doesn't carry any universal promises of blessings for the general public.There are other white scapular out there in Christendom that may carry such promises with them, but not the Dominican scapular.

If you are interested in a Dominican devotion that does carry promises, we highly recommend the Rosary. But that's a huge topic! Maybe we'll look at that another time...