Yesterday, on the memorial of St. Nicholas (December 6), the saint paid us an unexpected visit. We must have been good girls this year!

St. Nicholas came to visit the children at one of our local parishes, and stopped by after Mass to give us his greetings, too--as well as gifts of booklets about his life and times and (chocolate) gold coins. He also left a special treat for breakfast--fresh doughnuts!

The story of how St. Nicholas helped three penniless sisters get married by dropping bags of gold coins down the chimney and into their stockings, hung by the fire to dry, is more or less well known. Interestingly, there is another popular story associated with St. Nicholas and his attendance at the Council of Nicaea. There's only one questionable account of this episode, but it's the kind of thing you almost wish was true because it's just so...well, read on!

According to the legend, St. Nicholas was attending the Council of Nicaea and got a little testy when he heard the heretic Arius expounding the idea that Jesus was not truly God and man, but only man--created by God, not one being with Him. As he put it, "There was a time when the Son was not." Arius, who must have been a charismatic speaker and who definitely had an idea people liked (the Arian heresy was a big problem in the early church) seemed to be winning the day when:

"After the king seated himself on the throne, one hundred and fifty nine fathers seated themselves at either side of him, both they and Arius arguing with much unease.  Saint Nicholas, noticing that Arius was about to quash all the archpriests and moved by divine zeal, rose up and gave him a slap that shook all his members."

This is recounted The Life of St. Nicholas composed by Damascenos the Monk in the 16th century. Since the Council of Nicaea took place in the 4th century (325 AD, to be exact) it's certainly possible that some things got exaggerated or even just made up. Still, it gives us some fun Catholic memes to celebrate the memorial, such as this one: 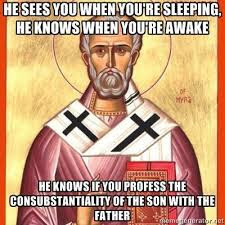 See, you can combine sound theology with popular culture!